" A Head By Any Other Name is Appetizing "

Creating a Dish & Naming It

After many years studying in collage to get my B.A in Culinary Arts where i specialised  in larder one thing struck me whilst flicking through twitter and looking at many chefs uses of the pigs head, i had never tackled one or used it in a dish so it had to be done !! 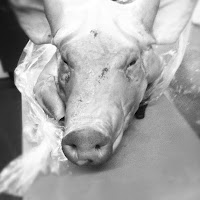 judging by some of the weighting staffs reaction to the head on my  bench it should have sounded alarms bells about putting it on the specials but i continued on regardless .

Myself  and Chef Donal got to work on removing the meat and skin from the head as i had never worked with the head before i followed his lead. As a chef i really enjoy this kind of work it intrigues me as to how the knife moves through the meat.

The cooking of the meat once rolled took several hours of slow cooking nad resting in the cooking liquer over night .

DoYou find You Get Attached to a Dish ?
A dish like this you spend time over you become very attached to it and also very proud as it develops into something that you believe and in your mind is a piece of art. At this stage of the development of the dish the customers views and thoughts haven't even entered my head.

Whats Next?
We taste it we approve it !! then its put on the specials to see how the paying customer reacts to the dish .
This is where i chose to just go for broke and call it pigs head croquette with celeriac puree nameko mushrooms (Ballyhoura Mushrooms) and Stonewell cider reduction . I was confident it would sell! 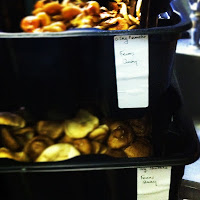 My confidence was shattered when it was relayed to me that customer reaction was it sounded disgusting ....
if they could only see and taste and know how much work was put into this dish . 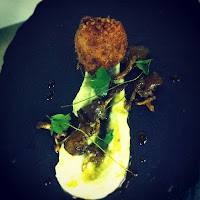 That evening i posted my work, the picture above on twitter to see how it would fair it got a blast of encouragement and support i was overwhelmed and confidence was restored but what did come out in conversation whilst chatting to people on twitter was that perhaps i should drop the "Pigs Head" in the dish title, Pat from Alexis in Dun Laoghaire suggested calling it a "crispy pork croquette" , Bryan Mc Carthy from Springfort suggested i call it "Piggy Noggin"

The answer to this question was yes please and the dish was proclaimed a success even the staff who didn't like the idea where won over . I was pleased with the name change but it began to question how i word my dishes, whilst tastes are changing and people are being more adventurous wording of dishes still has to be more carefully through out or do I carry on and try and convert the public to the lesser known cuts ?or are these unusual cuts exclusive to the higher end restaurants where unusual is the norm ?.........

Katelawlorchef
From Cork Ireland and now living in Worcester England with my husband Dan and daughter Ríona. I'm a qualified chef with a degree in Culinary arts over the years I ran an award winning restaurant for 9 years, worked closely in food education for adults and school children in several schools, countless food demonstrations and appeared several times on Ireland's national broadcastor. Cooking is a skill everyone should have. #learntocooklovetocook